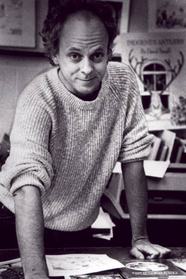 David Small- Winner of the Caldecott Medal, the Christopher Medal, and the E. B. White Award and author of over 40 picture books including Imogene's Antlers is COMING TO HICKLEBEES!

David Small’s long-awaited graphic novel Home After Dark is a savage portrayal of male adolescence gone awry like no other work of recent fiction or film.

Wildly kaleidoscopic and furiously cinematic, Home After Dark is a literary tour-de-force that renders the brutality of adolescence in the so-called nostalgic 1950s, evoking such classics as The Lord of the Flies. You will not want to miss this!

David Small was born and raised in Detroit. In school he became known as “the kid who could draw good,” but David never considered a career in art because it was so easy for him. At 21, after many years of writing plays, David took the advice of a friend who informed him that the doodles he made on the telephone pad were better than anything he had ever written. He switched his major to Art and never looked back.

A learn-as-you-go illustrator, David’s books have been translated into several languages, made into animated films and musicals, and have won many of the top awards accorded to illustration, including the 1997 Caldecott Honor and The Christopher Medal for The Gardener written by his wife, Sarah Stewart, and the 2001 Caldecott Medal for So, You Want To Be President? by Judith St. George. His drawings appeared regularly in The New Yorker and The New York Times.

Home After Dark: A Novel (Hardcover)

Thirteen-year-old Russell Pruitt, abandoned by his mother, follows his father to sun-splashed California in search of a dream. Suddenly forced to fend for himself, Russell struggles to survive in Marshfield, a dilapidated town haunted by a sadistic animal killer and a ring of malicious boys who bully Russell for being “queer.” Rescued from his booze-swilling father by Wen and Jian Mah, a Chinese immigrant couple who long for a child, Russell betrays their generosity by running away with their restaurant’s proceeds. Told almost entirely through thousands of spliced images, once again “employ[ing] angled shots and silent montages worthy of Alfred Hitchcock” (Washington Post, on Stitches), Home After Dark becomes a new form of literature in this shocking graphic interpretation of cinema verité.