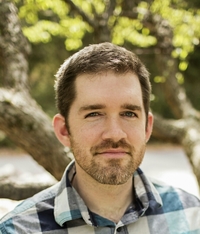 Bruce is about to have a whole new flood of problems!

Ryan Higgins, award-winning author and illustrator of We Don't Eat Our Classmates and the Mother Bruce series, is coming to Hicklebee's with his new book Bruce's Big Storm, in tow!

He will give a small presentation followed by a signing.

But when a big storm brings all his woodland neighbors knocking, he'll have to open his door to a crowd of animals in need of shelter-whether he likes it or not.

Readers will love this next installment of the uproarious, award-winning Mother Bruce series. Come say hello!

Ryan T. Higgins is a New York Times Bestselling author/illustrator residing in Southern Maine. He lives with his two dogs, two cats, one gecko, one tortoise, one son, one daughter, and one wife. As a child, he lived on a diet of cartoons, cheese sandwiches, and climbing trees. At the age of four he decided to become a cartoonist and he’s been making his own cartoons ever since. Browse the rest of his book here.

We Don't Eat Our Classmates (Hardcover)