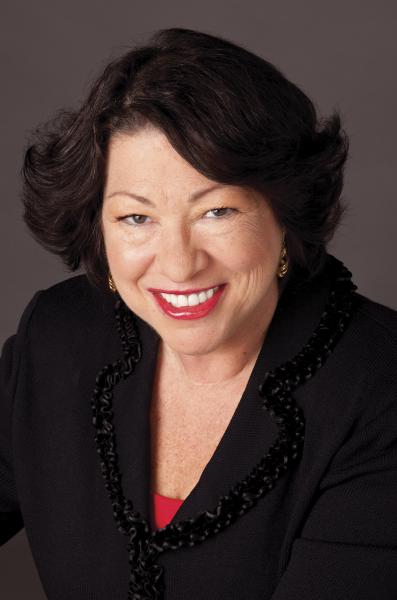 Tickets to this event have sold out. To add your name to the waitlist, please visit the Eventbrite page here:

If you were unable to get a ticket or would like additional autographed books, you can order signed copies of TURNING PAGES and THE BELOVED WORLD OF SONIA SOTOMAYOR, to be picked up after the event, through our website. Sotomayor will sign but will not be able to personalize these books.

Join us in welcoming U.S. Supreme Court Justice Sonia Sotomayor to celebrate the release of her two new children’s books, TURNING PAGES: My Life Story and THE BELOVED WORLD OF SONIA SOTOMAYOR!

Sotomayor will discuss her life story, from her birthplace in the South Bronx through her journey to become the first Hispanic and third woman appointed to the Supreme Court. Her picture book TURNING PAGES, vibrantly illustrated by Lulu Delacre, shares how Sotomayor’s life was shaped and propelled forward by her family, her own determination, and the books she read. THE BELOVED WORLD OF SONIA SOTOMAYOR is the middle grade adaptation of My Beloved World, her #1 New York Times-bestselling memoir. In sharing her own story, Sotomayor encourages children to read widely and dream big.

Interviewing Sotomayor will be Pam Muñoz Ryan, the New York Times best-selling author of Echo, Esperanza Rising, and The Dreamer.  She will moderate a Q&A with Sotomayor based on questions submitted in advance by audience members.

Would you like to submit a question for the Q&A?
Send us your question here!

SONIA SOTOMAYOR was born in Bronx, New York. She earned a B.A. in 1976 from Princeton University, graduating summa cum laude and receiving the university’s highest academic honor. In 1979, she earned a J.D. from Yale Law School where she served as an editor of the Yale Law Journal. She served as Assistant District Attorney in the New York County District Attorney’s Office from 1979–1984. She then litigated international commercial matters in New York City at Pavia & Harcourt, where she served as an associate and then partner from 1984–1992. In 1991, President George H.W. Bush nominated her to the U.S. District Court, Southern District of New York, and she served in that role from 1992–1998. President Bill Clinton nominated her to the United States Court of Appeals for the Second Circuit, where she served from 1998–2009. President Barack Obama nominated her as an Associate Justice of the Supreme Court on May 26, 2009, and she assumed this role August 8, 2009.

PAM MUÑOZ RYAN was born and raised in Bakersfield, California, holds a bachelor’s and master’s degree from San Diego State University and lives near San Diego with her family.  She has written over forty books, including the novels ESPERANZA RISING, BECOMING NAOMI LEÓN, RIDING FREEDOM, PAINT THE WIND,  THE DREAMER, and ECHO.  Many of her stories reflect her half-Mexican heritage. She is the author recipient of the National Education Association’s Civil and Human Rights Award, the Virginia Hamilton Literary Award for Multicultural Literature, and is twice the recipient of the Pura Belpré Medal and the Willa Cather Award.

Co-sponsored by the Hammer Theatre Center.  This event has no political affiliations and is not a fundraiser.